Scroll to Top
Categorized as
4017
Related

What will you be when you grow up a multipotentialite

Doing nothing is as critical for children as doing something

How do I help my child cope with failure 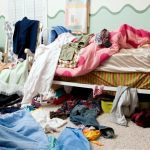 Tidy up or leave the mess?

SHOULD YOU TIDY UP AFTER YOUR CHILD

As both a parent and a childcare professional, I have over the years tried to align what I’m trained to do, teach and model with raising my own children.  I can recall as a child, endless arguments with my parents when my sister – who was extremely messy compared to me, used to finish ‘tidying’ her side of the room by stuffing things in cupboards and wardrobes. I was blamed for the remaining mess which took longer to actually clear up properly. One of the commonly asked parenting questions I hear from my clients is ‘how do I get my child to clear up after themselves’? So the question is, do we focus on teaching the skills of taking care of a bedroom and tidying up behind themselves to young children, or should you tidy up after your child?.

Time is always short in modern life, and nobody wants to waste any free time, stuck in the house pairing socks and organising the book-case and the kids wardrobes. So how do you put in place a system that allows things to be done quickly, so that kids are motivated to clear up and how much does you clearing up for them affect what they do later in life?

HOW CAN WE IMPRINT LIFE SKILLS

My teenage son, who as the first born, has always been to some degree, cleared up after and always had great bedroom storage and an extra space for play in the house – the privilege of many first born’s. Over the years, I’ve nagged, encouraged, motivated, worked alongside and passed on praise, criticism and practical ideas to him. I’ve observed at different phases in the growing up cycle, different responses to the concept of clearing up and it’s obvious to me, as an education professional, that they are linked directly to the developmental stages and fluctuations of what’s in focus at a particular age.  It is important to note, that when you are aiming to imprint a life skill, consistency and persistence are key. Irrespective of the negative responses you may see that make you think what you are doing is not getting through, it can often just be a matter of the age of your child and the stage of development at that specific time.

THE SYSTEMS I PUT IN PLACE THROUGH THE YEARS

In the very early years, around the toddler phase, I found I had a more willing tidy playmate who was stimulated to tidy, by the ‘game’ of racing to see who could put things away fastest – so the competition element was more obvious in this stage. I always made sure there wasn’t an overload of things in the bedroom and that there was space to put things away as well. I often exchanged toys in the early years and packed some away, switching them when my son got bored.

As an older toddler and into the nursery and early school years, I noticed that the urge to be independent was even more of a driving force when encouraged on the basis of ‘how grown up’ my boy had become and ‘how capable’ he was when he tidied his room so beautifully. The reward of a tidy room was the space to move about and have pillow fights without tripping up on things. He used to love putting labels on things that he understood, in the beginning we did this with pictures until he could read.

In the middle school years, I took a more hands-off approach, allowing ‘lost’ items to be the reason that he sorted things out for himself out of frustration. Alongside of this, I used to tidy up and put things back in their places when nobody else was home, so that a sort of system was still in place. Even though I allowed items to be forgotten and didn’t remind him of everything, I still supported this by encouraging him to make an odd lists or to put items out at night for the next day.

Entering secondary, when the school requirements for being organised and self managing were glaringly obvious, I more or less stood back altogether. I’ve left my son to pack his schoolbag, organise what kit he needs to take and remember to get everything ready according to a specific school schedule. In order not to be ‘hungry, or thirsty’ through the day he had to be sure to pack a proper balanced packed lunch.

I have to confess that all along, through all of these stages, I have gone into the bedroom and done a full tidy up once in a while and prepared lunch boxes when he has been too exhausted on occasions. Not necessarily daily, but frequently enough to create a sensation of tidy being vaguely normal and still being a mum who cares enough to help out when he really does need me.

WHAT ARE THE POTENTIAL RESULTS OF HELPING YOUR CHILD

A few weeks ago, I started to notice a change. I was wandering past the door of my son’s room and I found him not just tidying but ‘cleaning’, removing dust and emptying the bin etc, etc. Quickly hiding my astonishment and checking mentally whether I’d nagged, or shouted, or moaned, or even requested that this event take place, I realised that I’d not asked him to do anything.  I popped my head in the room and did what all good parents do to support good performance and I offered lots of encouraging noises and praise about how lovely the room looked now and what a great job he did.

I couldn’t help myself from asking the question ‘what motivated you to tidy up today’ and the reply was pretty great.  My 14 year old son, actually said, he had noticed it was untidy and it was bothering him, so he wanted to straighten everything up! He also wanted to organise his books so he could pack his school bag more easily in the early mornings without rushing and losing things.

That’s the moment that has made me convinced about whether or not you should tidy up after your child.  Finally, the payback for all the encouragement, guidance, support and sometimes discipline, that had been applied over the years! I’ve discussed this again with my son, as a born researcher and a teacher by nature, I wanted to really comprehend whether this truly was a learned life-skill.

MY CONCLUSION TO – SHOULD YOU TIDY UP AFTER YOUR CHILD

I’ve come to the conclusion from that discussion that although it’s really great to put some responsibility on a child’s shoulder’s to keep things tidy and in order in the house, I believe that ultimately, creating a sensation of a tidy room frequently yourself by having a whip round and putting things back in some order, not only demonstrates good practice to your child, but it also creates an appreciation over the long term that a largely tidy space, is more useful, more comfortable, and ultimately more satisfying as they have space to play, than an untidy mess where nothing can be found. Left to their own devices, it seems that children can become overwhelmed and not really know where to start and so they don’t start!

I’ve reflected on what I’ve put in place over the years to consider what may be good and bad in terms of educating our children to be organised and put some basic systems that help them in place. I think that the answer lies in a combination of sharing, doing yourself, making sure you set up the space correctly in the beginning to facilitate tidying, and leaving a minor amount of disorganisation so that your child learns by what specifically effects them – such as forgetting their maths homework, or missing football because they forgot their kit.

If a balance can be achieved between those things starting from the early years onward, where your child (irrespective of whether it was you or them that tidied), gets used to a degree of organisation and tidiness, then I don’t think that clearing up behind your child is a negative. I think that it is repeating, and reinforcing a basic life skill that will not only help your child to keep a tidy home of their own later, but will help them in their working lives where a little organisation, can be critical to your young adult and potentially contribute to their success at work.

It seems if my teen is an example of what will happen, then creating a low tolerance of too much mess by never allowing ‘too much mess’, stimulates their own desire to create a comfortable space to be in and contrary to common belief – teens actually do see mess, it’s just a matter of how much they can resist, ignore and tolerate it. I think that can be achieved by lots of small clear ups instead of one big overhaul. A daily run around teaches the discipline and creates a baseline measure for your child to work from.

So in answer to the question should you tidy up after your child – my answer in this case has to be YES, but in balance and always with the goal in mind that you are creating a habit for the future irrespective of who actually does the work every time.