Scroll to Top
Categorized as
1258
Related

Toddler out of control and having tantrums?

5 FUN THINGS TO DO WITH YOUR CHILDREN THIS WEEKEND 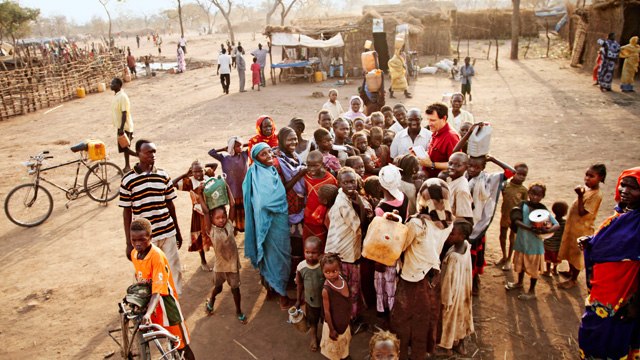 Who – New York Times columnist and co-author of Half the Sky: Turning Oppression into Opportunity for Women Worldwide.

Because – He has raised our consciousness about the struggle for gender equality and forced us to look at injustice around the world.

Photographed – By Brent McDonald in Yida refugee camp, in South Sudan, on February 16, 2012.

Nicholas Kristof likes to take his kids with him when he travels, but they don’t spend a lot of time at ­resorts. In 2008, he took his eldest son, Gregory, then 16, to South Sudan, and they sneaked without visas into two parts of northern Sudan—Blue Nile and Southern Kordofan, where the war is now raging. At 13, his daughter, ­Caroline, complained to him that her friends always went to the Caribbean for vacation. “So we went to the Caribbean—Haiti,” he says with a wry smile. “The cholera clinics.”

Kristof, 53, uses his twice-weekly New York Times column as a bully pulpit to advocate against one uncomfortable global injustice or another, from government abuses in the Sudan to the torture of circumcision that mothers ­inflict on their daughters across Africa and parts of Asia. He has spent the last ten years focusing on the oppression of women. Half the Sky, published in 2009, tells heart-wrenching, grisly stories of female exploitation, sex trafficking, slavery, and death. Not the typical stuff of Oprah’s Book Club, but after Winfrey devoted an entire show to it, sales of the book skyrocketed and it spent more than 60 weeks on the best-seller list. The book inspired the kind of grassroots activism that MoveOn.org would envy: It’s been discussed among prison populations, turned book groups from Connecticut to Oregon into fund-raisers for women’s organizations, and inspired a documentary series by the same name that will air on PBS in October. Today, Kristof continues to make us think about the world’s unsung victims and heroes. “We in the news business don’t cover reproductive health, sex trafficking, and maternal mortality very well,” says Kristof, who has made it his job to change that record. “People always ask me, Do you get depressed when reporting on poverty and global conflicts? I go back because it is hard to deal with. Gender inequality is not just a women’s issue, just as the Holocaust was not just a Jewish issue. It’s the moral issue of the twenty-first century.”